Human Brotherhood and the Gift of the Moment

When I was at the Gas Station earlier, as I
opened my door, the song "Everyday People"
by Sly and the Family Stone kicked off at the
exact moment that my foot hit the pavement.
I thought, "so this is what it's like to have a
soundtrack to my life". As I strolled toward
the entrance, Sly sailed into the chorus, and
as if in slow motion, everyone got into the act,
grooving and dancing through the doorway,
and giving each other high fives. Soon, everyone
was gyrating, shimmying, clapping their hands,
and smiling in the ecstasy of human brotherhood
and the gift of the moment. As the overhead camera
pulled away, people could be seen dancing at all of
the pumps, and all around the RaceTrac (Registered
Trade Mark) Fueling Station, where you can earn
rewards every time you fill up with the Fleet Fuel
Savings program. Register for a RaceTrac Card today,
and receive a Free Small Coffee and Fresh Doughnut
with your next Fill-Up (Restrictions Apply). This
message brought to you by RaceTrac Fueling
Stations, Atlanta, GA, Karl Bolsh, Jr, CEO.
Posted by Stuart McNair at 12:57 AM No comments:


it’s not just about trying to bring them a
little bit of joy and a break from the grind,
the grinder temporarily unplugged and
the hum of death briefly silenced. no,
it’s also about helping them break their
programming, and change the story that
they tell themselves. To slightly nudge
those stories they tell to themselves about
themselves, because the lies they’ve been
told since the day they were born get repeated,
and lead to sickness, and bad decisions, and
people end up in a cold, bloody room with a
meat grinder, one that just got plugged
back in after a nice, shiny sharpening.
Posted by Stuart McNair at 12:54 AM No comments: 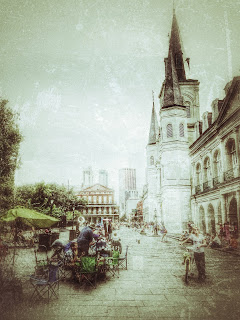 “let me know if you need anything”,
said the clerk, from behind a thick
wooden station and black
horn-rimmed glasses. “thanks.”
the hat store smelled of wool
and leather, and i quickly found
found one that suited me.

i needed a new hat because
my favorite porkpie had been forcibly
removed from my head by a
mighty gust of wind that almost
caused me to wreck my bike in the
middle of Halloween traffic down at
Decatur and Canal. It took my hat into
the street and tumbling down a block
in a perfect line, and finally under
the tire of a utility truck.

i walked out of the hat store,
bag in hand, into Jackson Square.
i put the hat on, and looked around
at the artists spread out under the oaks.

on this day, the sky was clear blue.
New Orleans was taking on her
“land of dreams” personality, the
one that inspired so many songs
back in the days of Storyville and
the other red light districts filled
with ragged bands and toothless
pianos along North Rampart St.
and Claiborne Ave.

that’s when i saw her. a little girl.
i’d never seen her before, and
she was seemingly unaccompanied,
sitting behind a tiny table in the
shade by the iron fence. she had
a handwritten sign that said
“dollarflies $1”.

i walked up the table, and the girl,
who i figured to be about nine,
looked up. “would you like a dollar fly?”
“yes”, i stammered, "sure", and fished
out a crumpled dollar from my shirt pocket.
i handed her the dollar, and she folded
it in Origami style, in the shape of a
dragonfly, then handed it back to me.

“wow”, i said. “but, what should
i do with it?” i asked. the girl said
“carry it with you until it flies away.”
i wasn’t quite sure what to say to
that , so I said “ok, thanks”, and
walked on. i looked at the dollarfly,
and gently put it in my shirt pocket.

that’s where it stayed, as i went
about my business, and went to get
my bicycle. i had a piano gig to get to
down on Iberville, so i was working
my way up Royal St.

nearing the corner of Royal and St. Louis,
i slowed down. a lone violin sang sweetly,
in the hands of a man in a weathered top hat.
and as i approached, i recognized the
melody to La Vie En Rose.

i was overcome by the loveliness of
the scene, and realized that i just
had to throw a dollar into the violin
case, although i didn’t really want to
stop. i was late as it was. still, i
reached into my front shirt pocket to
see if i still had any random dollars.

i felt the dollarfly then, and pulled it
out with my right hand, still slowly biking.
and just as soon as i did, a gust of
wind arose, and it took the dollar fly
from my hand. it flew to the right, and
in the blink of an eye, landed in the
violin case. the busker said a little
“thank you”, without stopping, and i
rolled through the intersection and
down the block. and as i rolled past
the silver and the antiques in the windows
at the opulent end of Royal, i thought
about how strange it was that the gust
of wind that carried that dollarfly
hadn’t affected my hat at all.

Posted by Stuart McNair at 12:43 AM No comments:

So in New Orleans, there are a few of these
post-Katrina hipster eateries, and a few times
I've tried their "tapas" and such, and usually I
leave unimpressed by the food or service, and
go on with my life. I just tried one that's been
on my list for a while.


I went in, sat at the bar, placed my to-go order,
and waited. There was one other couple there,
also at the bar. They were standard hipsters: guy
had the short hair and beard, girl had a the 50's
librarian outfit. They were in their late twenties.

So the bartender asked the couple "where are y'all
from"? I pretended to read, but I was curious.

"Oh, yeah?" said the bartender. "I used to live there.
What part of town?"

The couple responded, and named one of the city's
richest areas. Unable to hide her surprise, and at
the risk of embarrassing the couple, the bartender
blurted "What in the world do y'all do for a living?"

Clearly taken aback, the two tourists glanced at
each other, then the bartender. Then the man
answered.

There were a few mumblings after that; something
about one of their parents. But my food came, so
it was time to go. Having been on a fanatical
diet since Ash Wednesday, I had ordered a
Veggie Burrito (what could go wrong?).

When I got home, I opened my burrito, and began
to chow down, only to realize that my burrito was
filled with steak. Big, fatty, globs of gristly red meat.
Allow me to emphasize one fact: the couple was
already eating when I got there. My Veggie Burrito
was the only order in the place.

So overall, I enjoyed my trip to Hipster Heaven,
but tomorrow night it's back to home cookin'.
Posted by Stuart McNair at 12:20 AM No comments: 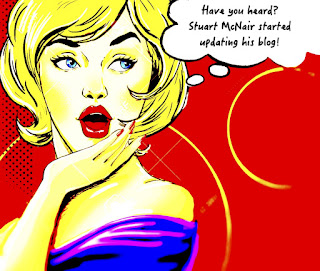 Posted by Stuart McNair at 11:20 PM No comments: 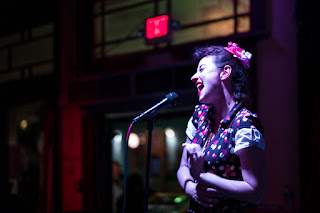 One of the great experiences I've had while living
and performing in New Orleans has been collaborating
with singer/songwriter/dancer Emily Estrella. Although
her latest chapter in New Orleans was far too short,
and came to an end in early 2016, we did a great deal with
our time together. She now resides in New York City.

I helped Emily record an EP while she was in town,
playing piano, B3 Organ, and Rhodes. I also arranged
the first track on the EP, titled "Old New France".
The project was recorded at Word of Mouth Studios
in Algiers, LA.

Emily's band, The Fauxbarrio Five, in which I played piano,
held a regular slot at 21st Amendment on Iberville St.
in the French Quarter throughout 2015. Here are
a few vids captured at one of our last shows there.

Wishing Emily all the best in the Big Apple!

Lulu's Back in Town - Emily Estrella & the Fauxbarrio Five 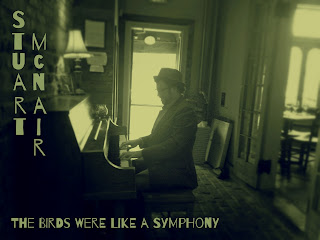 Here are the links for my newest release!
It's available for download at iTunes and Amazon only for only 99 cents!

Check out the video here!